Quickly got through three great books this month! With that in mind, following the reviews I may sometimes include one or two I didn’t stick with. Often a book is too similar to something I’ve just read or, in this case, was just too grim. That certainly doesn’t mean it isn’t worth your time… And please, don’t be shy with the comment section! Send me your thoughts or recent titles you’d like to recommend!! 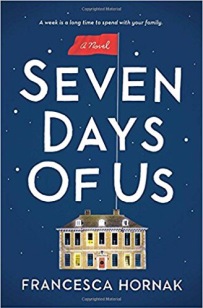 Seven Days of Us by Francesca Hornak

Here’s one to get you in a holiday mood! Perhaps I was judging a book by its cover, but I worried this one might be “chick-litty,” however I whizzed through it and found it way more complex and amusing than I’d assumed. Olivia, an aid doctor just returned from Liberia is under quarantine for the haag virus for seven days with her family in their ramshackle country estate in England during Christmas holiday. She’s feeling as disconnected as ever from her family; dippy sister, Phoebe, recently engaged is obsessing over wedding plans, and her parents are keeping some serious yuletide secrets. Emma, the matriarch is overcompensating to make everyone happy, despite her recent cancer diagnosis, which she’s decided not to share the family until after the quarantine. Thorny father Andrew has been recently contacted by the American son he never knew existed…who is on his way to England. As Olivia frets over a colleague’s haag diagnosis from afar we get a better understanding about her prickliness around her spoiled family once she recounts her work and the suffering she witnessed in Africa. Once everyone’s secrets are revealed years of being pissed off and resentful come to a boil (it’s no cliché here, those Brits are re-pressed!) forcing all them to take a closer look at their relationships and themselves. Emma needs to stop ignoring the growing chasm between herself and her husband and Andrew needs to make some changes in his unsatisfying work life to be less grumpy. As the story wraps up the American son pops in and Phoebe’s wedding plans go awry and things wound up downright suspenseful and emotional…I LOVED this book!!! 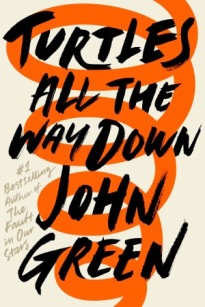 Turtles All The Way Down by John Green

Yes, John Green is labeled a YA writer, but hey, we were all teenagers once, am I right? Which means his stories connect with young and old…ish….and his characters are usually tackling issues well beyond their years. I mean, if you read Green’s The Fault In Our Stars where Hazel and Augustus battle cancer and didn’t love it AND cry…you have no soul. This time around he’s zeroing in on teen anxiety through sixteen-year-old Aza Holmes (Holmsey to her BFF), whose father died when she was eight. In other typical John Green fashion, she also has a hilarious sidekick, said BFF, Daisy who works at Chuckie Cheese and writes Star Wars fan fiction (she has a hell of a lot more followers than I do!). When news hits that a local billionaire is on the lam amid fraud and bribery charges, Daisy decides she and Aza will track him down and receive the $100,000 reward. Free college here they come! After all they have an “in,” Aza was once friendly with the missing rich guy’s son, Davis, after “meeting at a sad camp for kids with dead parents.” She’s pretty much just humoring Daisy but when she meets up with Davis, it obvious this kid has the weight of the word on his shoulders, having lost his mother at an early age, and now a father who’s abandoned him and his younger brother. The two connect when Aza realizes Davis accepts and embraces her, anxiety warts and all. For those of you blessed with never having this kind of anxiety, John Green nails it. The spirals, fear of being crazy, the narcissism that comes with the constant misery of irrational thoughts and feelings…it’s exhausting. Yeah, been there, and clearly so has the author. I wish this novel had been around when I was experiencing teen anxiety because Green does an excellent job letting people of all ages know that they are not alone.

For fans of Eat, Pray, Love, Nunn’s memoir starts off with similar heartbreak, a successful food writer in Chicago, she loses her job and her beloved brother, Oliver, to suicide. Her grief makes her realize that her emotionally detached fiancé is a complete jerk, so he’s gone, too… all in the first chapter…! Oh, and she’s a functioning alcoholic (girl is messed UP!). But, through the magic of Facebook, she reaches into the void for help and quickly finds a community of people who share their own heartache and encourage her to go on a food tour to reconnect with old friends and new. At the start of her adventure, wobbly from rehab, she visits her cousin and oldest friend in Atlanta and they embark on a pilgrimage into southern cooking with a host of cousins whose specialties range from peanut brittle to pickles and smoking their own ham while explaining the history and family lore of each. By including recipes and memories of the people who make them allows the author a kind of therapeutic unpacking of some of the deep-rooted unhappiness she experienced in her family, growing up in Galax, VA. Although a vivid character, her manic, hysterical mother thrived on reminding her five kids that motherhood prevented her from being a “star.” Eye roll. As an adult she is frustrated by her repressed siblings who refuse to talk about Oliver’s death, but as she travels around, reconnecting with extended family and old friends, always over food, she begins to leave behind the toxic relationships, forgiving both her family and herself, and finally finding the peace and comfort in life she so desperately needed. Great, inspiring redemption story.

Tried it, but couldn’t get through it….

Focused on one crumbling family in the aftermath of Hurricane Katrina, this story was just too…heavy. Never-the-less, I mention it because it felt authentic in terms of the devastation left behind in New Orleans, was well written and is currently receiving phenomenal reviews.

This is a text widget, which allows you to add text or HTML to your sidebar. You can use them to display text, links, images, HTML, or a combination of these. Edit them in the Widget section of the Customizer.