Anything Is Possible by Elizabeth Strout
A few blogs back I recommended My Name Is Lucy Barton and this is Strout's equally impressive follow-up. While the first story was told from Lucy's point-of-view while recuperating from a mysterious illness and reconnecting with her mother in New York City, this takes us back to her home town in rural Illinois. Each chapter is told by different people mentioned in the first book, characters flowing in and out of stories in this small town that links them together. Man, some of these folks have some serious skeletons in the closet, giving us very juicy stories rooted firmly in the ground. Although Lucy is not a prominent character until the end of the book, she hovers in people's memories throughout; her troubled, poverty-stricken family and the fact that she escaped to become a well-known writer. Like Lucy's brief visit with her mother in the first book, the stories here also touch on relationships and how the past affects them, from the old high school janitor who was kind to Lucy and now looks in on her reclusive brother, to the guidance counselor trying to help Lucy's wayward niece get into college. They all intertwine to create a unified and beautiful look at the good, the bad and the ugly in life. Strout is truly an incredible writer. 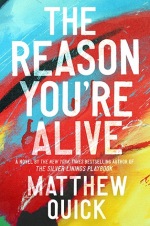 The Reason You're Alive by Matthew Quick
One minute is laugh-out-loud funny, the next cringeworthy, as narrator, David Granger, a crusty Vietnam vet recounts his life (to the government?) following brain surgery. Granger paints himself (with very colorful language) as a hard core Republican patriot, but it's soon clear he has a mushy inner core, once we discover his best friends are Vietnamese, black and gay. After he moves in with his weepy liberal son, Hank, and beloved grand daughter, Ella, it turns out that Granger survived a lot more than 'Nam. He returned to find fellow vets in various states of PTSD and drug abuse, which led to meeting, and later losing, his troubled wife, Jessica, whose emotional scars ran as deep as his own. He tells us early on the brain surgery was ordered by the government and took a lot of his memories, so I wasn't sure how reliable of a narrator he would be. That didn't get in the way of this very good story, which includes a possible imaginary friend (he's not sure) from his time in the jungle, becoming a banking and real estate tycoon upon returning from 'Nam and trying to fix up his son with best friend, Sue. Oh and a persistent and important question looms, "Who is Clayton Fire Bear?"

Goodbye, Vitamin by Rachel Khong
This is all about memories… I felt like I was really in this woman's head since this is told in the from a year-in-the-life of Ruth's diary. I know diaries conjure thoughts of deep dark secrets but this is much more reflective as she moves back home after a tough breakup with her fiancé and to help out with her father's recent dementia diagnosis. A beloved history teacher who's been pushed out of the local college due to his illness, her father, Howard, hides out in his home office alternating between moments of lucidity and difficult events like a police escort home after undressing and hanging out on a neighbor's porch. Although it's clear Ruth sees Howard as a wonderful father, we discover he often cheated on her mother (even with dementia!!) and went through a period of raging alcoholism. Brother Linus is quiet and resentful of it all and her mother often takes to hiding away from everyone, too. On a personal note, for anyone who has moved far away from "home," Khong does a nice job with Ruth's perspective of her youth and running into old friends and neighbors that I completely identified with. Interspersed throughout the book are pages from Howard's diary, recounting funny, touching moments with Ruth as a toddler and it is in these pages we start to see the parent-child reversal as Howard deteriorates. Ruth's voice is sometimes sad, often funny and I couldn't help but root for all of them.

This is a text widget, which allows you to add text or HTML to your sidebar. You can use them to display text, links, images, HTML, or a combination of these. Edit them in the Widget section of the Customizer.